Where do Goblins Come From?

I’ve been playing role playing games since I was a wee thing. For me it all started with the Teenage Mutant Ninja Turtles (and other Strangeness) game. My first character was a mutant weasel named Tannon. 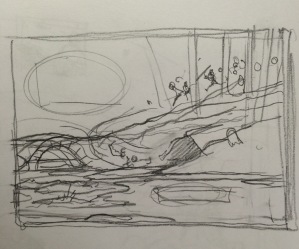 Since those long-ago days I’ve played many different types of RPGs, in several different systems, and explored all kinds of stories and genre mash-ups. And like many role players I hold a special affection for Dungeons and Dragons.

D&D, that most prototypical of RPGs, lets players run loose in a wide, somewhat generic fantasy world full of taverns and dungeons and dark towers and, of course, lots of monsters and creatures to fight on your quest for fortune and glory. But one thing always bothered me about D&D.

See, in this game alignment (good, evil, indifferent) is designated. The creatures you fight, event the fully sentient ones who are making their own decisions, are just evil. This problem is definitely not unique to D&D. It’s in all kinds of stories, but it comes up a lot in our gaming group all the time.

This allows player characters to charge into a dungeon and put all the goblins they find to the sword without having to ask questions like “does that goblin have a family?” or “is this goblin fighting me because it sees me as a trespasser in its home?” No, you just hack the goblin to pieces because it’s evil. Case closed. 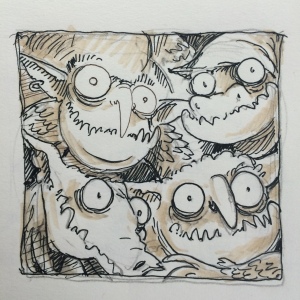 So I’ve written a picture books for the goblins. For the weakest, grimiest denizens of our fantasy worlds. Goblins are the ugly little creatures everyone feels comfortable hating, even thought they don’t pose much of a threat. I decided to give the goblins a chance. I sent a goblin on a quest (his name is Goblin) and he became one of my favorite characters. 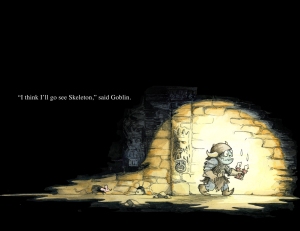 One one day, if you see my Goblin staring out at you from the shelf of your bookstore or library, I hope you don’t draw your sword right away.

Ben Hatke is the #1 New York Times Best-Selling author of the Zita the Spacegirl trilogy, as well as the picture book Julia’s House for Lost Creatures. His next book, Little Robot, will be in stores September 2016.

One thought on “Guest Post From Ben Hatke: Where Do Goblins Come From?”